Long An Club helps striker Nguyen Anh Duc satisfy his passion for playing football and also creates conditions for this striker to prepare for a coaching career.

Anh Duc has a special and memorable career in Vietnamese football. He used to be a promising young striker, at the same time as Le Cong Vinh, Phan Thanh Binh, Pham Van Quyen. But at the most prolific stage, he did not have much to contribute to the Vietnamese team. He even refused to be recruited.

When coach Mai Duc Chung temporarily led the Vietnamese team to compete in the 2019 Asian Cup qualifiers, Anh Duc was invited to return to the team. After thinking about it, the striker accepted the invitation of coach Mai Duc Chung. Since then, he has made many contributions to Vietnamese football, especially in ASIAD 2018 and AFF Cup 2018.

Considering Anh Duc’s career as a book, now he has written an interesting new chapter in his career. At the Long An Club  at this time, Anh Duc both directed and played on the field. This is a rare thing for Vietnamese players. 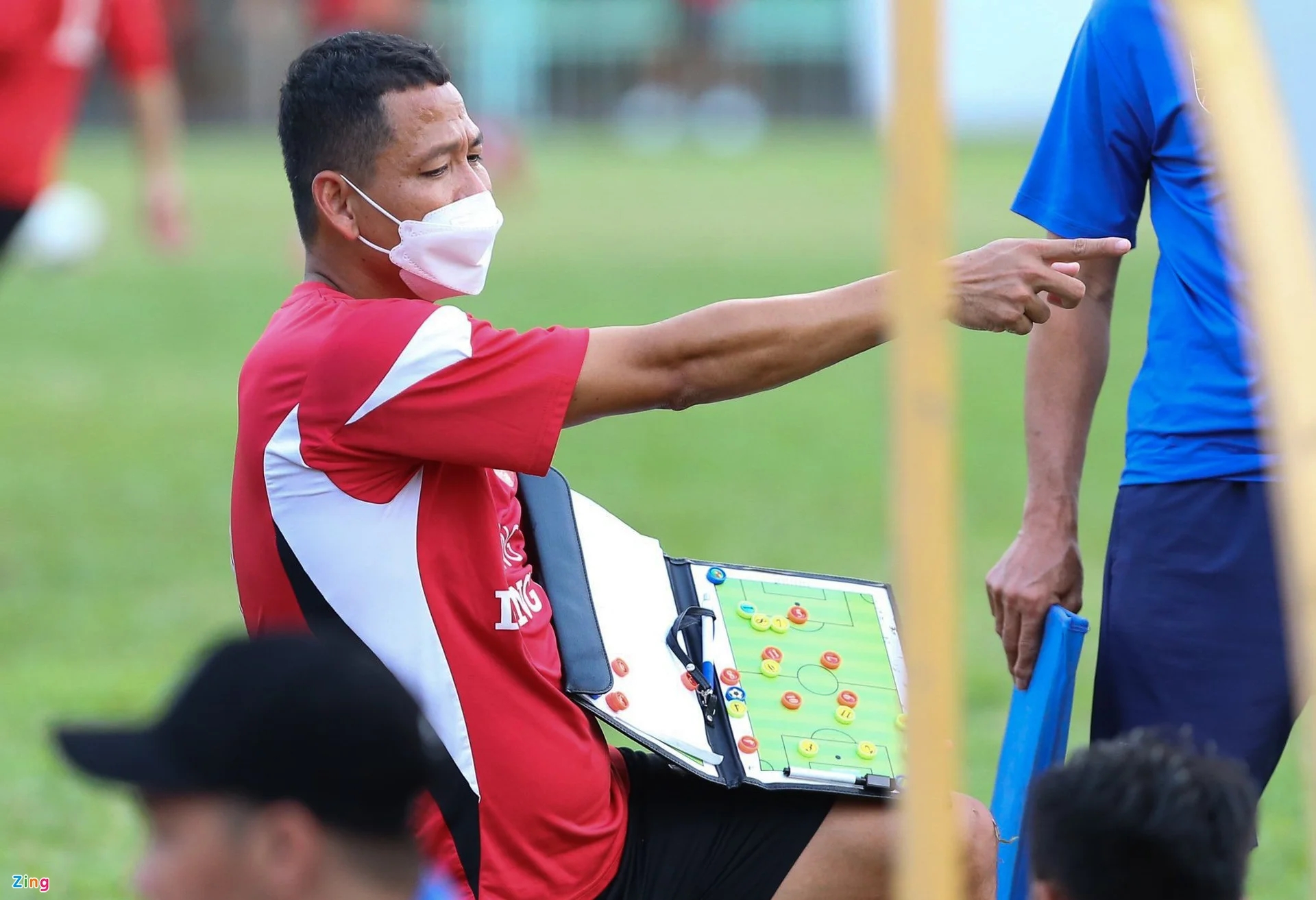 Since the 2021 season, Anh Duc has assisted in coaching at Long An Club, but until now, he has just started to directly hold the table to direct the team’s tactics. Photo: Bao Toan.

On the afternoon of January 21, fans caught an image of  Anh Duc holding a sand table, directing tactics for Long An players in a friendly match with Binh Dinh Club. Under the guidance of former striker Binh Duong, the First Division team won 1-0 against many national players of coach Nguyen Duc Thang.

According to Zing’s observation, Anh Duc is the main director of Long An Club, although in name, Mr. Ngo Quang Sang is the head coach. He often goes to the edge of the border to shout and remind his juniors. During the training sessions, the striker born in 1985 also directed the tactics.

At this time, Anh Duc had a coach of type A. He was qualified to lead the team in the V.League. However, this player is not in a hurry to step into the training path. In the 2022 season, he played two roles at Long An Club.

” We have signed a contract with Anh Duc . He will play for one more season with two roles. When he is healthy, he will enter the field of play, otherwise support the coaching staff,” said Chairman and CEO. Long An Club Vo Thanh Nhiem told Zing.

In fact, Anh Duc supported the training and led the young players right when he signed a contract with Long An Club in the 2021 season. But when it was time to prepare for the 2022 season, he directly took the reins. Tactical table for teammates when they have a coach’s license. Long An Club is providing a lot of support for Anh Duc to practice his military skills. Anh Duc can still contribute a lot to Long An Club whenever he is on the field. Photo: Bao Toan.

In parallel with training, Anh Duc still retains the fire of passion to be ready to play at the age of 37. In the second half of the match against Binh Dinh Club, he entered the competition. At this time, coach Ngo Quang Sang will direct.

In the first-class team, Anh Duc still meets the expertise. Even in the 2021 season, he played prominently. After 5 appearances, Anh Duc scored 5 goals, helping Long An Club to rank 3rd in the rankings. His goals brought 10 out of 12 points that Long An Club won. 100% of the goals of this team belong to Anh Duc.

On the field, Anh Duc not only does a good job of scoring goals, which is his forte, but also contributes a lot to the gameplay. He is ready to play the role of a satellite, drifting to the wings to support the juniors. He even backed down to the middle of the field to assist in the deployment of the ball.

Head coach Ngo Quang Sang once shared with Zing: “Brother Duc coming to Long An makes us very happy. He trains professionally, contributes to the team, helps the coaching staff and guides young players. Anh Duc’s experience and level are undisputed. I’m satisfied, and Long An fans are looking forward to it.”

It is rare for Anh Duc to both play and train in Vietnamese players. But that is not difficult to understand if we follow this striker closely. Professionalism is an important factor in building Anh Duc of today.

After parting ways with Binh Duong Club in 2019, Anh Duc hired a personal coach to practice recovering from injuries, keeping fit so he could return to the pitch. In the 2020 season, he wore the HAGL shirt in the second leg. However, he did not get to play much.

With many other players, they can choose to retire at the age of 36, especially when the economy is stable. But Anh Duc is not like that. He is still diligently running after the ball and getting his coach license to build the next solid steps for his career.

Maybe in the near future, we will see Anh Duc play the role of head coach of the V.League team. And he is preparing well for that.

Transfer news on the evening of July 27: Ronaldo’s future is clear, Harry Kane is about to make a surprise landing

Atletico Madrid ‘clean up’ to welcome Ronaldo despite fan outrage